At Gaia EnviroTech we know that starting your circular economy journey can be confronting, so hopefully these FAQs can help.

How do cows pollute the environment?

Cows contain one of the most well-known fermentation vats, the rumen, which is part of the stomach (in other animals as well). Fermentation takes place during digestion. A cow on average releases between 70 and 120 kg of Methane per year. Methane is a greenhouse gas like carbon dioxide (CO2).

Cows release methane as part of their digestion process. A significant portion of these emissions come from methane, which, in terms of its contribution to global warming, is 23 times more powerful than carbon dioxide.

The world’s 1.5 billion cows and billions of other grazing animals emit dozens of polluting gases, including lots of methane.

Who designed the Gaia EnviroTech biodigester and rapid composter?

The Gaia EnviroTech biodigester and rapid composter are designed by Sandy Gray (co-founder and Technical Director) and the team at Gekko Systems/Gaia EnviroTech.

Can I have more than one biodigester or rapid composter?

Yes, we can install the Gaia EnviroTech biodigester and/or rapid composter as a modular setup. Cells, or stacks of cells, can be added (or moved to a new location) as required.

How is the biogas used?

The renewable biogas will be used as an energy source for your business. The biogas is considered climate change neutral, as the amount of greenhouse gases entering the atmosphere remains the same.

How much does a Gaia EnviroTech biodigester or rapid composter cost?

As Gaia EnviroTech biodigesters and rapid composters are specifically sized to meet requirements and incorporate a number of pre- and post-treatment modules, prices vary. Please contact us to discuss any anaerobic digester options.

What is Anaerobic Digestion?

Anaerobic digestion is an interconnected series of biological processes in which microorganisms break down biodegradable material in the absence of oxygen. One by-product of this process is biogas, which can be used as a fuel to generate electricity and heat.

What are the environmental advantages of a biodigester?

Why use a biodigester?

Factors effecting the functionality of an Anaerobic Digester

A biodigester produces the gases methane and carbon dioxide which do not smell. Unless the biodigester is open for maintenance, cleaning, inspection, there should be minimal odour. The digestate leaving the biodigester is largely consumed by the anaerobic microorganisms and therefore little is left to generate odours outside the system.

What materials can the biodigester process?

Almost any organic material can be used to feed a biodigester, but some work better than others. Gaia EnviroTech biodigesters utilise a wet digestion method, and organic matter can form a 10-15% solids slurry (liquid) are generally optimal.  In general, wastes such as fruit and vegetable matter work well, animal manures offer stability but lower methane output. Contact us to discuss your waste option.

How long does it take to process the material through anaerobic digestion?

Optimal digestion times are generally in the order of 10-25 days. However, depending on the drivers for the project this can be altered.

How big is a Gaia EnviroTech biodigester?

Gaia EnviroTech Biodigesters are relatively small units compared to the large, multi-megaliter versions installed at sewage treatment plants. This is done to fill a niche in the market for a lower cost, highly configurable and expandable system, with greater mobility. Generally, our systems treat 1,000 – 190,000 L organic waste per day, however smaller or larger systems can be installed.

Which feedstock is suitable for the Gaia EnviroTech Biodigester?

Contact us today and find out if your waste is suitable for a Gaia EnviroTech Biodigester.

Aerobic composting uses a controlled process to break down organic materials by microbial action in the presence of oxygen. Organic inputs are typically shredded and blended to achieve the optimal mix of nutrients and moisture. Biological activity generates heat, and piles are managed so they achieve temperatures greater than 55 degrees celsius. This ‘pasteurises’ the organics, killing weed seeds and potential pathogens. The composting process coverts the organics into a soil conditioner with beneficial microbes, soil carbon and nutrients.

How long does rapid composting take?

What is the Bio-Lab used for?

Modular in design, the Gaia EnviroTech anaerobic biodigester is both highly configurable and efficient. Download the technology profile to learn more.

Designed and manufactured in Ballarat, Victoria, the system is easily transportable and quick to install on site. Download the technology profile to learn more. 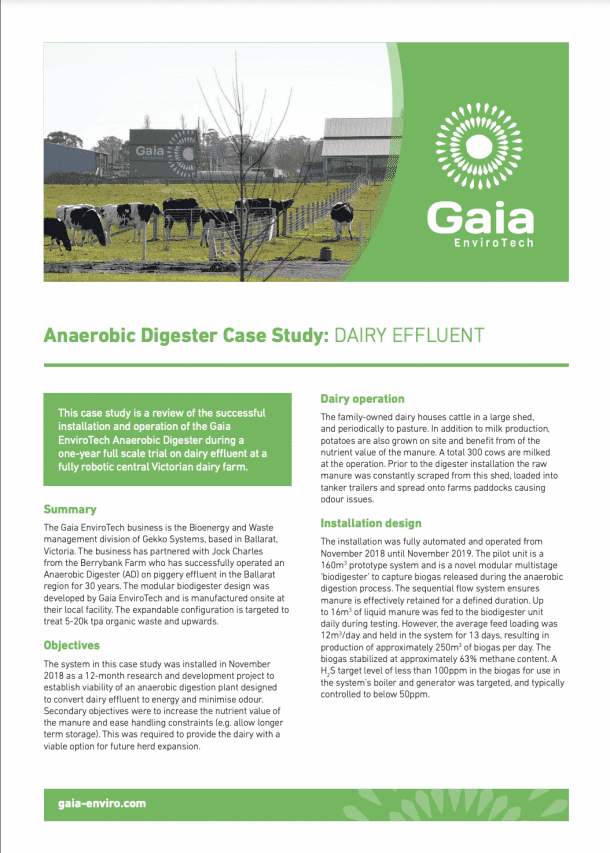 The system in this case study was installed in November 2018 as a 12-month research and development project to establish viability of an anaerobic digestion plant designed to convert dairy effluent to energy and minimise odour. 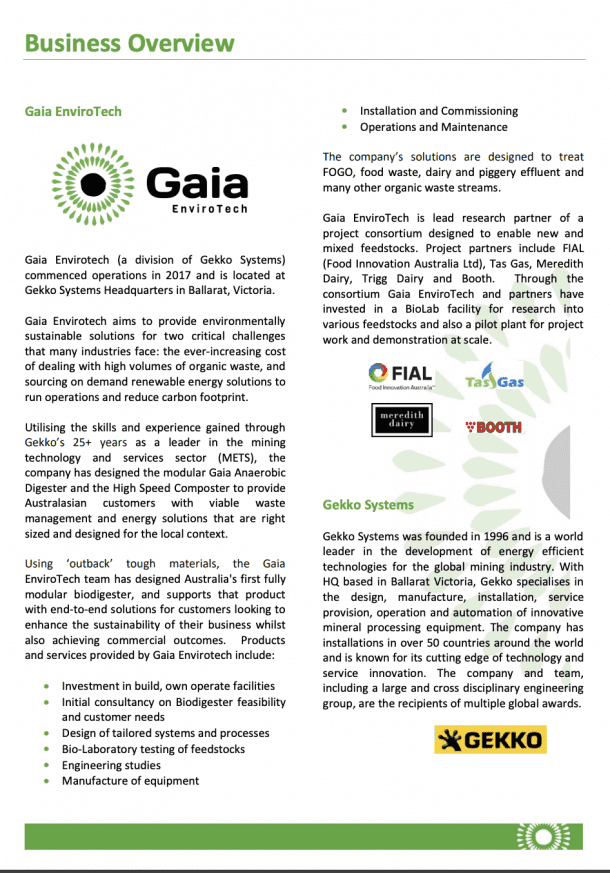 The Capability Profile contains information on: